What is an ESD?

An Emergency Services District (ESD) is a grassroots government created by voters in an area to fund fire protection, emergency medical services, or both. More than 300 districts are operating in Texas, and more are added at almost every uniform election date.

This is a history of the ESD#4 in Brazoria County. For years and even decades the City of Pearland has been supplying Fire and Ambulance service to residents and businesses within the ETJ or the extraterritorial jurisdiction. The ETJ is generally the Area 1 mile outside of the border of a City. Pearland graciously provided these services with the intent that one day they would Annex the areas. Many areas within the original ETJ had been annexed in previous years and are being provided Fire and EMS through their City of Pearland taxes. In 2016 the Texas State Legislature passed a bill known as SB-6. In this bill it had been determined that areas of particular size would no longer be allowed to be annexed arbitrarily by the city after December 20th of 2016. The bill said that in the future before an area can be annexed they would have to ask those being annexed if they wanted to be annexed. Because of this bill and the time restraints the City of Pearland determined five areas that they wanted to get annexed before the bill took effect. Some of those areas that were annexed brought legal petitions to not be annexed and therefore the City of Pearland withdrew their plan to Annex them. So with no annexation in the future, The City of Pearland rightfully decided that they would no longer provide services for free to those people that they were currently serving in the ETJ. They set a deadline of 1/1/2019 to cease services. That is when and why we determined to form an ESD to cover our area. We gathered signatures to get it on a ballot and on November 6th the citizens in the ETJ voted to authorize the formation and ESD to provide or to secure services that would no longer be available from the City of Pearland without funding. Below are several links to community newspapers, the City of Pearland, and the State of Texas which will outline how we got where we are, why we got where we are, and how the state regulates most aspects of all ESDs.

Here are some news articles on the history of the ESD:

The boundaries of most Emergency Service Districts include the Extra Territorial Jurisdiction of a particular County. Other areas sometimes opt into an ESD. This is the map that includes the residents and properties that are in the ESD No. 4 of Brazoria County. 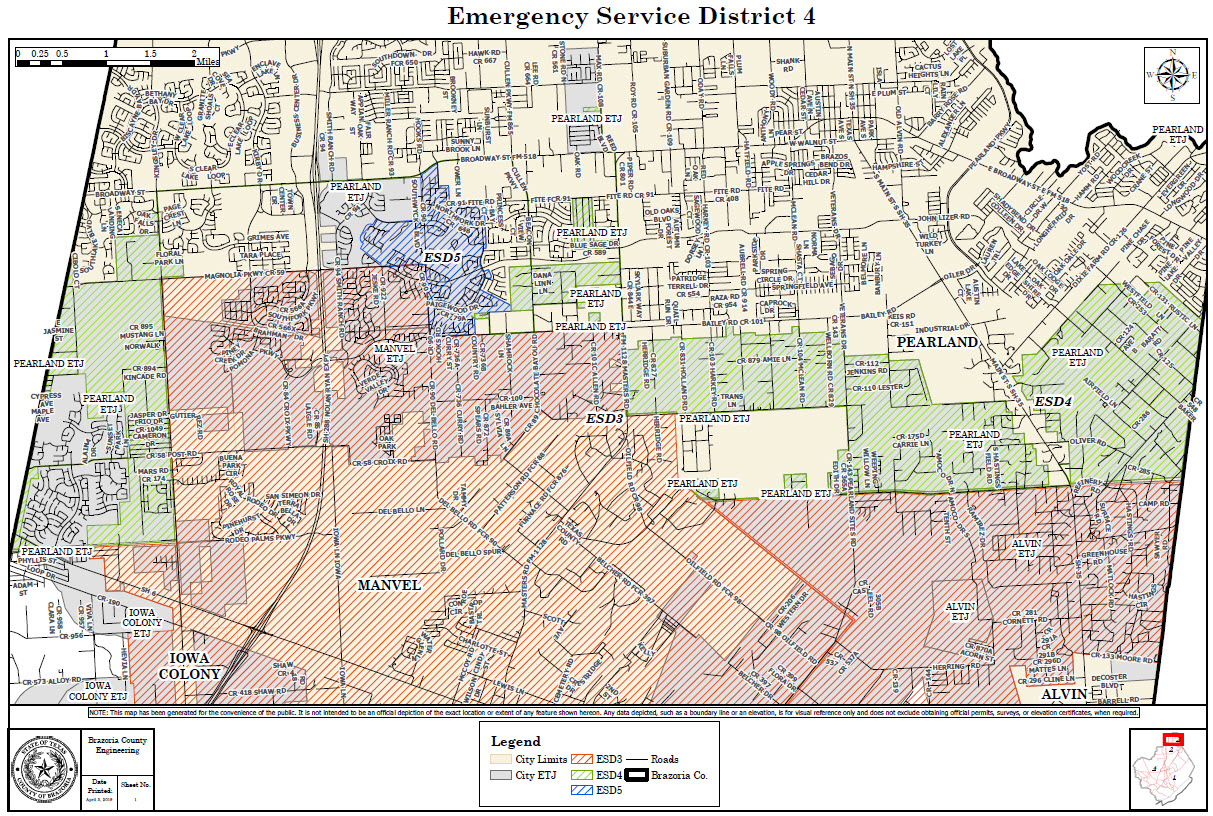 Vote for ESD #4 on November 6th

Pearland has determined you, I and others that live in an Extra Territorial Jurisdiction (ETJ) of the City of Pearland will NOT receive Fire and Ambulance service at our property effective 1/1/2019. You may have seen on the news last October / November the city was trying to annex many areas that were ETJs of the city of Pearland. After many citizens protested the annexation, the City agreed not to move forward with the planned annexations of ESD #4 areas.

For decades the city of Pearland has provided Fire and Ambulance service to the ETJ at no charge assuming that someday they would annex all the ETJs. They have decided they can no longer afford to provide that service to you and to me. The option before us is an Emergency Service District (ESD). There’s plenty of information about that on the Pearland website and it’s regulated and governed by the State of Texas. The maximum amount that we can be taxed in an ESD is $0.10 per $100 of evaluation. We are not paying Pearland city taxes since we were not annexed but we are requesting to form an ESD and pay $0.10 per $100 evaluation. If you have a house assessed at $200,000 you would be billed on your annual property taxes $200 for ESD #4 for which would go to provide funds to a designated department to continue Fire and Ambulance service to you and me and others in the ETJ. The City of Pearland tax rate is $0.685059 so the tax paid on the same house if we had been annexed would have been $1,370.12.

It is very important that we vote in favor of ESD #4 in November. I have talked with insurance agents who have assured me that with no definite Fire and Ambulance Service, especially of the quality of service from Pearland, insurance premiums would go up on my property and I’m sure on yours as well. I’ve heard estimates for fire coverage going up an additional $1,000 to $1,500 annually. And how can you blame an insurance company for charging outrageous premiums when your house is likely going to burn to the ground before somebody shows up?

Several of us were involved in protesting and fighting the annexation; we did not want to be paying City taxes without having City water and sewer service. This on the other hand, is a great deal for us and it’s a good deal for the City of Pearland. They just cannot fiscally ask the citizens of Pearland to continue to fund Fire and Ambulance service to those of us that are outside the City limits and pay nothing into the City. Please join me in voting FOR ESD #4 on November 6th. IT WILL BE AT THE BOTTOM OF THE BALLOT!

You received this letter because you cared enough to VOTE in 2016. This isn’t a Republican / Democrat issue, this is a “you and me” need Fire and Ambulance Service issue. Please encourage your neighbors to vote FOR the formation of ESD #4.

Thank you, Bill Brummett. Endorsed by many ETJ neighbors.

The Commissioners generally meet on the fourth Tuesday of the month at the David L Smith Fire Administration Building, 2703 Veterans Drive, Pearland, Texas 77584.

Thanks for showing an interest in Brazoria County Emergency Services District Number 4 by visiting our website. Would you like to volunteer to serve your community and neighbor’s? We currently have an opening for a commissioner to serve on our board. We meet once a month and do a few things during the month to prepare for the meeting. To be eligible to serve on the ESD#4 board, you must live in our district. So if you have a line item on your property tax bill for ESD#4 you would be eligible. If you’re interested please use the email link below to send your name, address and phone number to our board for consideration. board@bcesd4.com

For persons with questions or needing help regarding website accessibility, or to request the provided information in alternative formats, please call (713) 237-1221.